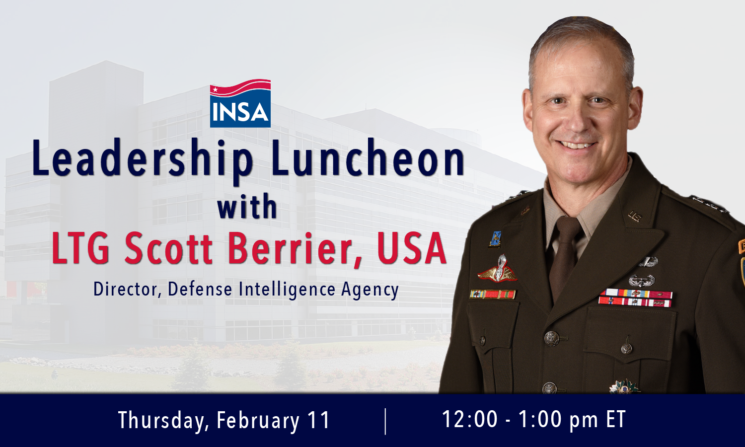 Moderated by INSA Chairman Tish Long, the conversation will address LTG Berrier's priorities as the new DIA director, especially as they concern integrating advanced technologies like AI/ML into the workforce and agency operations; the status of MARS; and workforce development needs in an increasingly competitive and dynamic global environment. In addition, there will be time for audience Q&A.

Lieutenant General Scott Berrier became the 22nd Director of the Defense Intelligence Agency in the fall of 2020. Prior, he served as the 46th G-2 in the Department of the Army. LTG Berrier is a career intelligence officer, having served at every level from Battalion to Combatant Command. His Army, Joint Service, and Special Operations assignments include service throughout the United States, the Republic of Korea, Iraq, and Afghanistan. LTG Berrier's leadership experience ranges from Company Commander to Commanding General and Senior Mission Commander. His awards and decorations include the Distinguished Service Medal, Defense Superior Service Medal, Legion of Merit, and Bronze Star Medal, among other recognitions.

Note: This program will not be recorded! It is closed to the press and off the record.