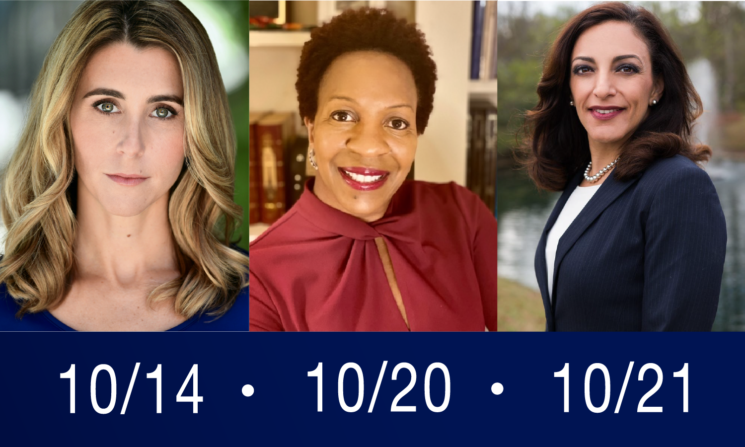 INSA's fall is full speed ahead, with a jam-packed calendar of programs featuring inspiring IC leaders. Each of these programs are only 45 minutes in length, allow for audience Q&A, and can be streamed from your computer or phone—so it's convenient to join us and participate!

For this installment of Wednesday Wisdom, INSA is sitting down with Sarah Megan Thomas, writer, producer, and lead actress in A Call to Spy. The film, which became available in theaters and on demand on October 2, highlights the trailblazing espionage efforts by Virginia Hall and other brave women in Winston Churchill's "Secret Army" during WWII.

Moderated by INSA President Suzanne Wilson Heckenberg, this conversation will give viewers a behind-the-scenes perspective on how the film came to be, provide insights into the characters' lasting legacies, and will highlight the unique power of women in the IC.

Sarah Megan Thomas is an award-winning actress, producer, and writer. For her latest feature, A Call To Spy, Ms. Thomas wrote the screenplay, produced, and plays legendary spy Virginia Hall. Previously, she created the concept, co-wrote the story, and starred in the groundbreaking film, Equity, for which was honored with a Women's Image Network Award and The Creative Coalition Spotlight Award. She also starred opposite James Van Der Beek in the romance-drama Backwards, and has appeared in various other films and television shows including Law and Order, SVU. Ms. Thomas starred in numerous Off-Broadway productions, including playing Berowne(a) in a gender-bending Love's Labour's Lost. A graduate of Williams College, Ms. Thomas trained at both RADA and Drama Studio London.

The Intelligence Community's workforce is one of its greatest assets, which makes issues of diversity, equality, and inclusion top priorities. Join us for Coffee & Conversation with Rita Sampson, the IC's Chief Diversity Officer and Director of Equal Employment Opportunity, ODNI, on Tuesday, October 20 at 9:00 am ET, for a discussion about these critical issues.

Rita Sampson currently serves as the IC's Chief Diversity Officer and Director of Equal Employment Opportunity within the ODNI. Previously, Ms. Sampson was the Senior Civil Liberties Advisor at ODNI. Before joining ODNI, she served in various capacities within the Department of Justice, including as Assistant Director within the Executive Office for United States Attorneys (EOUSA) and in Assistant General Counsel roles within the EOUSA and FBI.  Throughout her career, Ms. Sampson's practice areas have included government ethics, civil litigation, employment litigation, and Constitutional law. Ms. Sampson earned her juris doctorate from Wake Forest University and is a member of the Virginia State Bar. She formerly served as President of the Greater Washington Area Chapter of the National Bar Association, Women Lawyers' Division.

Katie Arrington is the Chief Information Security Officer to the Under Secretary of Defense for Acquisition and Sustainment. Previously, Ms. Arrington served for two terms as a South Carolina State Representative and was a candidate for the U.S. House of Representatives for South Carolina in 2018. Her career includes significant experience in cyber strategy, policy, enablement, and implementation across both state and federal government as well as in the private sector. Ms. Arrington's 15 years in industry included time at Booz Allen Hamilton, Centuria Corporation, and Dispersive Networks.